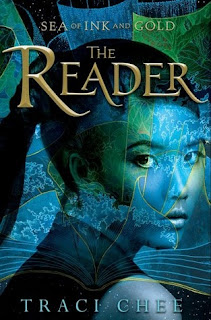 The Reader by Traci Chee

Source: I checked out the digital audiobook from my local library through Overdrive.

Goodreads Summary: Sefia lives her life on the run. After her father is viciously murdered, she flees to the forest with her aunt Nin, the only person left she can trust. They survive in the wilderness together, hunting and stealing what they need, forever looking over their shoulders for new threats. But when Nin is kidnapped, Sefia is suddenly on her own, with no way to know who’s taken Nin or where she is. Her only clue is a strange rectangular object that once belonged to her father left behind, something she comes to realize is a book.

Though reading is unheard of in Sefia’s world, she slowly learns, unearthing the book’s closely guarded secrets, which may be the key to Nin’s disappearance and discovering what really happened the day her father was killed. With no time to lose, and the unexpected help of swashbuckling pirates and an enigmatic stranger, Sefia sets out on a dangerous journey to rescue her aunt, using the book as her guide. In the end, she discovers what the book had been trying to tell her all along: Nothing is as it seems, and the end of her story is only the beginning.

This is a complex, magical story of a girl's journey to find answers. I loved how it weaved multiple storylines and POVs together and how they all intertwined in the end. However, I don't think audiobook format is the best way to read this book.

I really wish I had the physical book instead of, or at lease along side of, the audiobook. I just saw the audiobook was available at my library, so I decided to check it out a whim. The varying storylines and character point of views got very confusing and muddled with the audiobook. It wasn't always clear when the story was changing to another perspective. It left me saying to myself, "I have no idea what is going on." way too many times. I constantly felt disjointed. Part of this is my fault because I like to do other things while listening to the audiobook, driving, cleaning, a craft, so I probably wasn't paying attention as closely as I should have been. However, this hasn't been a problem with any other audiobook I've listened to.
I will say the audiobook narrator is great. I really enjoyed her voice, but it's not the ideal format for this book. Maybe it would be better if you could read the physical book while you listen.

I did really love Sefia's journey, though. She along with the side characters are very compelling and I loved hearing their stories and backgrounds unravel. The pacing is a little slow in the beginning as the reader gets to know all of the characters (there are many), but it picks up when the storylines start coming together. I also liked the pirates and sea aspect. They added an adventurous feel to the book.

One of the coolest things about this story is how the main focus is reading and books. In this world, no one knows how to read or really what written words are. It was interesting to hear Sefia and other characters describe words and books since they had never seen them before. It even took me a second to figure out what they were describing, haha.

In the end, there are a lot of answers and many things come together. I believe there is even a chapter at the end called "Answers." All of the answers are dumped at once, and even though it was a socking, surprising, ah-ha moment, I wish more answers were weaved into the story along the way. I just felt so in the dark for a long time. We still don't get ALL of the answers, there are a ton of "why, what, how" questions left. I assume those will get addressed in the sequel, which I will read, but as a physical book.

I enjoyed the fun journey, unique premise, and characters, but the writing style, pacing, and audiobook format left me dissatisfied.

Disclaimer: The Book Depository "Buy now" button above is an affiliate link. If you purchase this book or any other through that link, I would get a small commission.
Posted by Kassidy Williams