The Raven Boys by Maggie Stiefvater 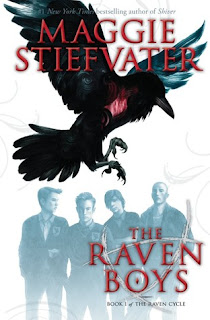 Summary:
Every year, Blue Sargent stands next to her clairvoyant mother as the soon-to-be dead walk past. Blue never sees them--until this year, when a boy emerges from the dark and speaks to her.
His name is Gansey, a rich student at Aglionby, the local private school. Blue has a policy of staying away from Aglionby boys. Known as Raven Boys, they can only mean trouble.

But Blue is drawn to Gansey, in a way she can't entirely explain. He is on a quest that has encompassed three other Raven Boys: Adam, the scholarship student who resents the privilege around him; Ronan, the fierce soul whose emotions range from anger to despair; and Noah, the taciturn watcher who notices many things but says very little.

For as long as she can remember, Blue has been warned that she will cause her true love to die. She doesn't believe in true love, and never thought this would be a problem. But as her life becomes caught up in the strange and sinister world of the Raven Boys, she's not so sure anymore.

This book completely surprised me! I didn't exactly know what to expect going in, but I definitely didn't think I would end up having so many feels!

The characters in this story are so well developed and multi-deminsional. Each one has their own struggles and distinct personality. Blue is the "main character", but the writing switches perspectives quite a lot so the reader gets to know all of the other characters very well. The group dynamics of the Raven Boys are so fascinating to read about, and I loved that they were a focus of the story. I grew to love each boy individually, and I was surprised by the emotional depth.
Blue is an interesting female protagonist because she doesn't struggle very much with her self confidence and identity. She is pretty sure of herself in most aspects and it was a refreshing change from most YA. However, something is missing with her character in this first book. I look forward to connecting with her more in future books and seeing more development and growth from her.

The writing is beautiful, but it does take some getting used to at first. It's almost a writing style that the reader has to savor and it takes a tiny amount of work to read. Stiefvater's use of similes and her descriptions are very unique and interesting, they build such a wonderful, almost surreal,  atmosphere for the book.
This is a slower story, partly because of the writing style, but mostly because of the character development. The world also has some complexities, and it takes time to build that foundation. The slower pace is necessary and helps build the tone of the story, but it did somewhat hinder my enjoyment. If you are not a fan of slower, character driven plots, then this may not be a book for you.

The plot does get really exciting towards the end, though. Everything starts falling into place, and there are some great, well written twists. Secrets are revealed, which mostly just leads to more mysteries, and by the end, I was left satisfied but wanting more.
There is some romance, but it is not focused on as much as I expected it to be. Romance plot lines are definitely hinted at, but not so much explored in this book. I can't wait to see where those go.

This is such a different kind of paranormal read. It doesn't really fit into a category, and I love that about it. I love the characters and I can't wait to read more of their journey in the next books!