Blood and Salt by Kim Liggett 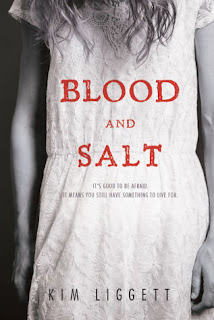 Source: Hardcover copy received from the publisher, thank you!

Summary:
Romeo and Juliet meets Children of the Corn in this one-of-a-kind romantic horror.

“When you fall in love, you will carve out your heart and throw it into the deepest ocean. You will be all in—blood and salt.”These are the last words Ash Larkin hears before her mother returns to the spiritual commune she escaped long ago. But when Ash follows her to Quivira, Kansas, something sinister and ancient waits among the rustling cornstalks of this village lost to time.

Ash is plagued by memories of her ancestor, Katia, which harken back to the town’s history of unrequited love and murder, alchemy and immortality. Charming traditions soon give way to a string of gruesome deaths, and Ash feels drawn to Dane, a forbidden boy with secrets of his own.

As the community prepares for a ceremony five hundred years in the making, Ash must fight not only to save her mother, but herself—and discover the truth about Quivira before it’s too late. Before she’s all in—blood and salt.


This book is different from any book I've read before. It definitely gives off creepy vibes, but I wouldn't call it horror.

This is a dark story with dark themes a few gruesome scenes, but overall, I would say it's more of a supernatural mystery thriller, not so much scary.

The book starts off with an attention-grabbing opening scene. The main character, Ash, has a vision of a dead girl hanging in her kitchen. This dead girl has been with Ash her whole life, and now the girl's dark story and connection to Ash are about to be revealed. This set up a great mysterious, dark and ominous tone for the story. I was sucked in at that point and couldn't wait to see where the story was going.

The book unfortunately lost this quality during the middle portions. It just got super weird and confusing at points and seemed to stray from the heart of the story.
Although, thankfully, it picked back up at the end and things really came together for a heart-pounding conclusion.

Ash is an interesting, well developed character; I really enjoyed the interactions between her and her twin brother Rhys. They have a true connection that felt real and I love the family dynamics that come into play. It was also quite an adventure following them in the search for their mother, the discovery of their ancestors, family history, and unraveling the truth behind this crazy ceremony. There are also some great side characters, especially Beth, she just really lightened up the story and made it more enjoyable. Others provided secrets to unveil and great tension between the characters.

Quivira is its own little cult world that is stuck in the middle of a corn field and also back in time. Its history and culture were hard to wrap my head around at times, which lead me to feel somewhat distant from the story. I felt like I didn't get a total grasp on what was going on until the end of the book, and even then I still don't think I totally understood everything.

There is a romance and it is somewhat insta-lovey, I felt like the characters didn't get to know each other super well before feeling madly in love, but there are some supernatural things at work. Even with that, it was an element that pulled me into the story and I ended up liking it. The love interest is kinda strange, but he added some excitement to the story. The romance gets pretty dramatic at the end, and I'm excited to see what happens with it in the next book.
While the world and plot left me feeling a little disconnected from the story, the characters with their strong personalities and dynamics pulled the story together for me. I do plan to pick up the sequel when it comes out. If you enjoy darker books with magic, cults, and mysteries, this would be a good one to check out.