Never Too Far by Abbi Glines 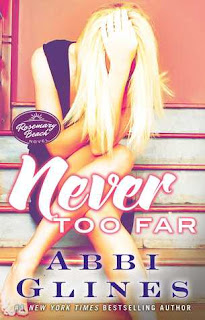 Warning: Since this is the second book in the series, the summary and my review contain spoilers for the first book. Proceed reading at your own risk.
To read my review of the first book, Fallen Too Far, click here.

Just when Blaire allowed herself to fall for her stepbrother, Rush, he revealed a life-altering secret so devastating that she couldn't forgive him. Unable to face him again, Blaire leaves the promise of true love behind in Rosemary Beach and returns to the comforts of her small town in Alabama, wanting nothing more than to put the summer behind her.

But unexpected news complicates Blaire's plans, and she's forced to trust the one man she shouldn't. Trapped between Rush's fierce desire to win her back and her own sense of self-preservation, Blaire doesn't know if she's doing the right thing . . . or if she's making the biggest mistake of her life.

I was very surprised and hesitant at the direction the story takes at the beginning of this book. I just wasn't sure it was a story line I would like. However, I ended up enjoying it and it provided a different kind of plot than I've read before in New Adult.

The end of Fallen Too Far is pretty emotional, and I wasn't sure how Rush and Blaire were going to come back from that. Well, it is definitely a rocky journey in Never Too Far. Again with this book, I was sucked in and couldn't stop reading. I had to know how all this craziness was going to go down. I have to say, by the middle, I was pretty frustrated. There's a lot of back and forth and ups and downs.  The doubt and indecision the characters go through is understandable for the situation, but it got aggravating. Both Rush and Blaire were getting on my nerves.
Thankfully, the end redeemed itself. Some unresolved issues got resolved and it made for a heartwarming and uplifting moment that really surprised me. It also added a little depth and another layer to the story.

I have to say, the side characters make these books a lot better. I love Bethy, Jimmy, Grant and Woods, they add so much to the story. Nan on the other hand.. is unbearable. I guess there has to be a villain. She is really awful, though.

Overall, I was surprised by this book and ended up liking it. However, because of the repetitive, immature, back and forth fights I didn't enjoy it as much as the first. These books are unrealistic and overly dramatic at points, but I can't help but be entertained by them.

Check out my review of the third book, Forever Too Far!