Forever Too Far by Abbi Glines 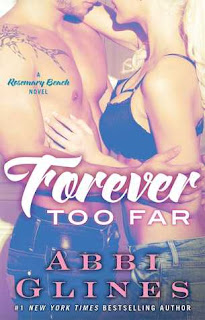 Warning: Since this is the third book in a series, the summary and my review will contain spoilers for the first two books. Proceed reading at your own risk.

Things haven't been easy for Blaire and Rush. The couple has been tested by the revelation of shocking family secrets and a surprising event that forced them to come to terms with their future. Yet there has never been any doubt: their love knows no limits, and they'll do whatever it takes to stay together.

Now they're ready to settle down in Rosemary Beach and build a family. For Blaire, it's a fantasy come true. But while Rush has promised Blaire forever, his loyalty to his spoiled and manipulative sister, Nan, strains their would-be happiness. Rush is ready to be a family man, but which family will he ultimately choose?

Add to Goodreads
I really enjoyed this conclusion. It's slightly more chill than the other two books. Don't get me wrong, there's still big things going on, but I liked Blaire and Rush's relationship more in this one.
Never Too Far left off on a sweet note, seeing Rush be so committed to Blaire and their baby was special. Also, the conversations with Blaire's father really added a great family dynamic to the story. I love seeing the turnaround her father has. The family aspects make for a multi-demsional story in Forever Too Far.
At the beginning of this book, things get pretty tense. Nan is literally horrible. There is some insight into why she is the way she is, but I just could not handle her.
I did enjoy the middle and last part of the book. There are some new characters introduced that keep things fresh and also give me hope for books about them.
This one is a pretty low-key read overall, but there are still some surprises sprinkled in that caught me off guard. I just really loved seeing Blaire and Rush grow as a couple and also settle into their future.
I have to say, I was slightly disappointed by the very end. No spoilers, but it just didn't leave me teary-eyed and emotional like I hoped it would. We've been on a crazy roller coaster journey with Rush and Blaire, so I was expecting the end to have more of an impact, but I didn't get that.
It was an interesting ride reading about Rush and Blaire's story. I don't think these books are the best New Adult books out there, but they are good for what they are. I like that they don't take themselves too seriously, and they're light reads that I fly through. I'm excited to read more books about the other characters in Rosemary Beach.
Rating: