The Orphan Queen by Jodi Meadows 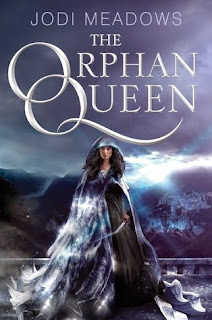 She is a princess. When the Indigo Kingdom conquered her homeland, Wilhelmina and other orphaned children of nobility were taken to Skyvale, the Indigo Kingdom’s capital. Ten years later, they are the Ospreys, experts at stealth and theft. With them, Wilhelmina means to take back her throne.

She is a spy. Wil and her best friend, Melanie, infiltrate Skyvale Palace to study their foes. They assume the identities of nobles from a wraith-fallen kingdom, but enemies fill the palace, and Melanie’s behavior grows suspicious. With Osprey missions becoming increasingly dangerous and their leader more unstable, Wil can’t trust anyone.

She is a threat. Wraith is the toxic by-product of magic, and for a century using magic has been forbidden. Still the wraith pours across the continent, reshaping the land and animals into fresh horrors. Soon it will reach the Indigo Kingdom. Wilhelmina’s magic might be the key to stopping the wraith, but if the vigilante Black Knife discovers Wil’s magic, she will vanish like all the others.
Goodreads Page

This is such a fun and fast-paced YA fantasy read. I really enjoyed myself while reading it. It captured my attention and I didn't want to put it down.

This book is more plot driven. There is a sufficient amount of character development and world building, but that's not the focus of the story. Although the plot was predictable for me and things were a little too convenient, it kept me entertained and engrossed.

I loved following Wil in her journey to take back her kingdom. It was great to see her grow and start to think for herself. Many people are trying to control her and she is under a lot of pressure. She has to decide what she really believes and question the ideas she always thought were true. The side characters are interesting enough, but my favorite is definitely a character named Black Knife. He is shrouded in mystery and he adds so much intrigue to the story. However, I figured him out pretty easily.
There is some romance, but it doesn't take over the story. I enjoyed seeing it develop and the drama that ensued.

The world and magic system are neat and it was fun to learn about them. At first it was confusing, but   things get explained, and I feel like I have a pretty solid grasp on it after finishing.

This is a light read as far as fantasy goes. Everything from the world to romance is moderately developed. I care about the characters and what is going on, but it's not the most well-written story. It does leave off on a cliff hanger, so I'm very excited for the next book. The book intrigued and entertained me, but it does lack depth.