An Ember in the Ashes by Sabaa Tahir 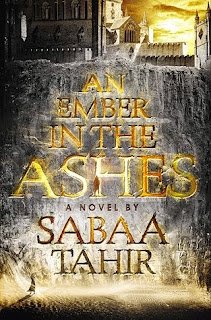 Series: An Ember in the Ashes #1

Goodreads Summary:
Laia is a slave. Elias is a soldier. Neither is free.
Under the Martial Empire, defiance is met with death. Those who do not vow their blood and bodies to the Emperor risk the execution of their loved ones and the destruction of all they hold dear.
It is in this brutal world, inspired by ancient Rome, that Laia lives with her grandparents and older brother. The family ekes out an existence in the Empire’s impoverished backstreets. They do not challenge the Empire. They’ve seen what happens to those who do.

But when Laia’s brother is arrested for treason, Laia is forced to make a decision. In exchange for help from rebels who promise to rescue her brother, she will risk her life to spy for them from within the Empire’s greatest military academy.
There, Laia meets Elias, the school’s finest soldier—and secretly, its most unwilling. Elias wants only to be free of the tyranny he’s being trained to enforce. He and Laia will soon realize that their destinies are intertwined—and that their choices will change the fate of the Empire itself.
Goodreads Page

I thoroughly enjoyed this book. It lived up to the hype and met my expectations. I felt strongly for the characters, and the plot kept me on my toes. I couldn't put this book down!

The two main characters each have their own point of view, which I love. I didn't prefer one over the other, I was captivated by both. Laia and Elias have some major internal struggles going on. Both are unsure of the person that they are and what kind of person they want to be. It was wonderful to see them grow and find the strength within themselves to persevere in the very different but equally difficult positions they are in. They have many similarities that aren't so obvious on the surface, and it was beautiful seeing their stories intertwine and seeing these similarities come to light. The character development is on point. I totally fell in love with both Laia and Elias.

I love the writing, each chapter left me wanting more. This book is pretty long, but I felt like I was flying through it when reading. It didn't get slow or drag for me, I felt engaged the entire time. The writing style and plot sucked me in and wouldn't let go. The plot has somewhat of a slow build up, but by the end, things get crazy! I am so glad this is the first book in a series because I don't think this could work as a stand-a-lone with all of the build up.

There were two things that did bother me some, the world building and romance set up. For the world building, it felt weak in describing what this world actually looks like. There's a lot of explanation about the culture of the two groups and their history, along with some magic aspects.  However, the actual physical setting was hard for me to grasp. I could see inspirations from ancient Rome, but there is also a modern feel to it. There didn't seem to be enough details and description for me to truly imagine this world. Especially in fantasy, the setting is important to me, and I like to feel like I'm there. I just didn't get that with this book.
As far as the romance, it's hard to go into without spoilers, so I'm just going to touch on it. The romance does not take over the story, but there are some romantic plot lines that develop, mostly towards the end. I'm all for one romance that is introduced, but some love triangles are hinted at, and I'm not a fan of those. I don't see the necessity of creating that kind of drama. I think development of the main romance is enough drama.

Overall, this is an awesome start to a new YA fantasy series and I am dying to see where it goes. I think this is also going to be a movie, which is super exciting!