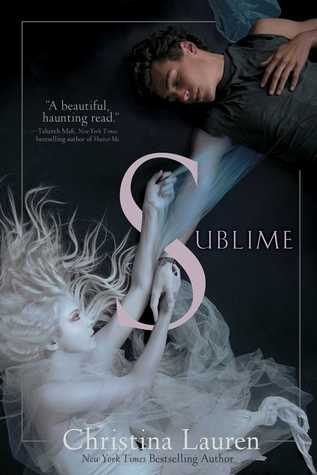 Source: An advanced copy was provided by the publisher in return for an honest review. Thank you!

Summary:
When Lucy walks out of a frozen forest, wearing only a silk dress and sandals, she isn’t sure how she got there. But when she sees Colin, she knows for sure that she’s here for him.

Colin has never been captivated by a girl the way he is by Lucy. With each passing day their lives intertwine, and even as Lucy begins to remember more of her life—and her death—neither of them is willing to give up what they have, no matter how impossible it is. And when Colin finds a way to physically be with Lucy, taking himself to the brink of death where his reality and Lucy’s overlap, the joy of being together for those brief stolen moments drowns out everything in the outside world. But some lines weren’t meant to be crossed…
Goodreads Page

I really liked this book in the beginning, but as it went on, it went downhill. At first I was captivated by Lucy's story. I wanted to know what happened to her and why she came back after death. Her connection to Colin intrigued me and their relationship excited me. However, at about the halfway point the story lost its gravity and some of plot developments just seemed silly. Towards the end I had a hard time taking it seriously, and I did not care about the characters any longer.

The story is really heavy on the romance, which I am usually okay with, but Colin and Lucy's relationship got to be too weird for me. At first I liked how they took their time and it was sweet. Then it became all about physicality and it lost meaning. They became too focused on the wrong goal and I stopped believing in them.
Also, just a warning, there are some mature romance scenes, so I wouldn't suggest this for the younger audience.

The mystery aspect is really interesting, and I like how it is explored. There are answers to Lucy's state of being and how she got there, but I did want to know more. As the book went on it became a little confusing and then very confusing by the end. I do wish it was explained more clearly, especially the ending. I understand that the vagueness adds to the haunting feel, but it just left me disoriented and not in a good way.

I like the writing style. It is quick and kept my attention. It's descriptive without going overboard. I was easily able to imagine everything, but the plot didn't get bogged down. I read this book in one sitting, and I think the writing was a big reason I was able to do that. It also created a strong, eerie atmosphere. The story is set in winter at a boarding school with a creepy history, and the writing did a great job of making this come to life.

This book starts out with intensity and intrigue. I felt drawn in by the setting and Lucy and Colin's characters. However, it lost its pizzazz as it went on and felt unrealistic and not believable. The characters became aggravating and the ending left me unsatisfied.

Overall, I was entertained by this story and I enjoyed the writing, but it failed to have a powerful effect.